Giovanni was recently seen featured in a commercial alongside Barstool Sports’ own Caleb Pressley.

You can view the :30 commercial spot HERE.

Caleb Pressley played football and gained popularity after being named the Supervisor of Morale for the University of North Carolina football team. He has gone on to work with the popular site and blog Barstool.  He has studied at both UNC and the University of Edinburgh School of Divinity.

Barstool Sports was founded in 2003 by David Portnoy and is a digital media company that produces content focused on sports and pop culture. 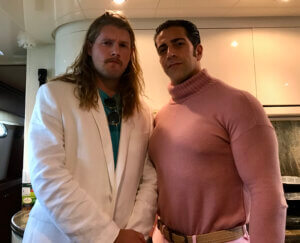 I think this pretty much sums it up 👍. #Quote #

This guy is ready for 2022. Given what I've commit

I think @drseuss pretty much sums it up best here.

#Throwback to a fun on field experience at @loande

It was a pleasure visiting @lifetime_performance_p

Thank you to the @marlins for inviting me to batti

Thanks to @miznerfit for having me introduce @reac

“So you wanna be a wrestler?" as the expression

I was honored to be a guest on @philip_levi's podc

Back presenting live in person workshops! I will b